Installing solar panels might not be as simple as some people think. Getting the most out of your solar panels comes down to a few key factors, a big one being the best angle to catch the most sun. Depending on where you live, the sun’s orientation will be different.

If you need to know what the best angles for solar panels are for your home, you have come to the right place! We’ll be talking about that shortly. And we’ll also talk about the sun’s positioning and how you can maximize your solar output based on the sun’s position.

What Is A Solar Panel Angle?

A solar panel angle is basically an alternative term that best describes your PV system’s vertical tilt. The only time when the solar panel has no angle is if it’s at ground level. Your solar panels can also be standing upright from the ground. In that instance, it’s a 90-degree angle. But the angle of your solar panels will play a vital role in how much electricity they can produce. The optimal angle for you is based on two key factors: your geographical location and the time of year.

Knowing where to adjust your panels to fit a certain angle will help you maximize your solar power and allow you to keep your home well-powered.

What Should Your Panel Tilt Be?

Your solar panel tilt will be based on latitude. Here’s a thing to keep in mind: the farther you are from the Equator, the higher the panel should be tilted. For example, if you live in southern California, the tilt on your solar panels will be lower because the sun’s position will be much higher. If you live in a state like Washington, the sun’s position will be lower and thus the solar panel tilt will be higher up.

Let’s crunch some numbers here: if your latitude is ranged from 20 to 25 degrees, the tilt angle for your panels should be around 15 degrees. If you live in a latitude ranging from 45 to 50 degrees, the tilt angle will range anywhere from 25 to 30 degrees. Keep this in mind when you are having your solar panels installed. If they are professionally installed, the technician should already be well aware of this.

Here’s how you can determine your optimal solar angle using a simple formula:

If it’s summer: Take your latitude and subtract it by 15. For example, if your latitude is 45 degrees, then the solar panel angle should be 30 degrees during the summer months in order to get a maximum amount of sun

If it’s winter: This time, take the latitude number and add 15. If your latitude is 45 degrees, then your solar panels should be set to 60 degrees.

As you can see, these angles will give you the best solar output possible throughout the year. Most of the solar panel systems that you install will be easy to adjust accordingly, with some even automatically adjusting throughout the year. As mentioned, the angles will also be based on location as well. Let’s take a look at a few examples of the ideal angles for summer and winter in specific cities:

Tucson, Arizona: First, we’ll be taking a look at Tucson, which is a city that gets plenty of sunlight each year. It’s also one of the US cities that is closest to the Equator compared to the other city we’ll be comparing shortly. If you are looking for a possible angle to set your panels throughout the month, it should be as follows: 34 degrees in the winter, 58 degrees in the spring and fall, and 82 degrees in the summer.

Keep in mind that adjusting the solar panels is not a simple task. Especially when it needs to be done four times out of the year. If they are on rooftops, then they may never be adjusted at all due to difficulty and risk of climbing onto your roof. So they’ll need to be on the ground in order for the solar panels to be adjusted as easily as possible.

Does A Roof Angle Affect Your Solar Panel Angles?

If you have a shallow or steep roof angle, it will likely make little to no difference when it comes to the amount of solar power output you’ll get. At some point, the solar panels and the roof angles will eventually balance each other out throughout the year. But keep in mind that shallow roofs will get more sun in the summertime, whereas steep roofs will get more sun in the winter months.

You could be in a state that will get plenty of sunshine throughout the year. But the angles of your roof may have little or no effect on the total output of solar power you’ll get on each individual day.

Roof direction might play a role in giving you the most sunlight possible because roofs that face south will likely receive more sun compared to houses facing the opposite direction. If you have a roof facing east, you’ll have more solar output in the morning while west-facing roofs will receive it late in the afternoon. 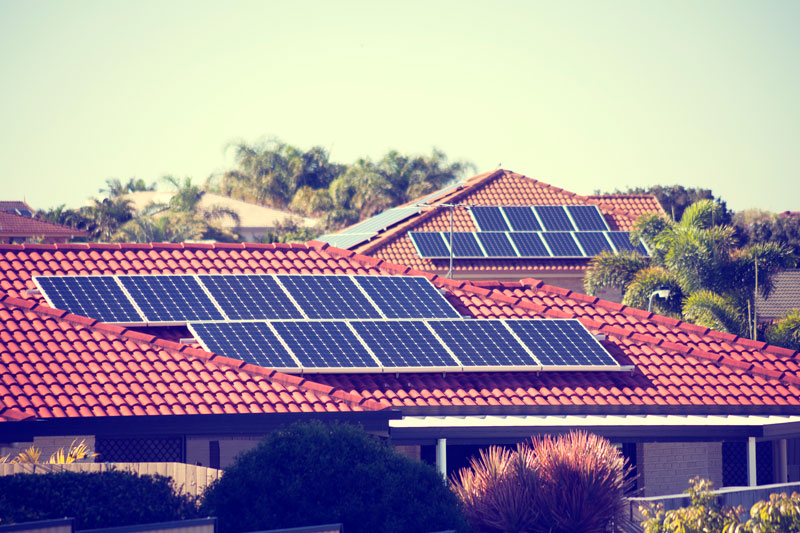 If your panels are placed on a south-facing roof at 30 degrees, you’ll get plenty of sun throughout the day. However, if the angle is 5 degrees then the overall output will be 10 percent less. Keep this in mind when you have your solar panels installed on your roof regardless of the direction it faces.

Will The Roof Angle Affect Your Overall Savings?

The short answer: no. To give you a more lengthy answer, it doesn’t matter what the roof angle is. It won’t cause any drastic changes to the money you intend to save just for using solar panels. The panels will simply require an angle that accommodates your roof angle. You’ll still be able to pay less on your energy bill when compared to what you were paying prior to switching to solar power.

Can Solar Panels Be Installed On Flat Roofs?

Yes, solar panels can be installed on flat roofs. Those roofs have a minimal slope allowance that will be perfect for most solar panel systems. It can still have a slight tilt and still have enough to utilize the solar energy from the sun. Oftentimes, a flat roof is actually better because you can install the solar panels at the perfect angle. It’s also important to take into account the direction of where the roof is facing. As mentioned before, the direction will determine when solar panels will produce the maximum amount of output.

It’s always possible to maximize your solar power output if you take all of the factors that affect your solar panels into consideration prior to installing them. If you are interested in getting solar panels installed, it might be wise to assess a few things before you move forward. The first thing is to know your latitude. It will give you a good idea of where your solar panels will need to be placed.

The second thing is to know what the optimal angles are for each season. Refer to the formulas above so you are aware of the ideal angles for your solar panels for spring, summer, fall, and winter. Adjusting them will not be an easy task but it is usually worth it to get the most out of your solar panels.

Finally, it’s always a good idea to ask questions to a local solar panel installer near you. They have the knowledge and know-how regarding solar panels. They will install them exactly how they are supposed to so that you can receive the best results possible.