How Do Solar Panels Work?

How Do Solar Panels Work?

Solar panels have a lot of power; power that the solar industry likely has yet to even tap into. Yet solar panels seem like such a simple, unassuming, albeit noticeable system. The simple answer to how solar panels work is that they absorb the energy from the sun and use that energy to create electricity.

Solar panels are the energy-efficient option, ensuring that fewer greenhouse gasses are released. After all, using sunlight is a source of energy that is sustainable, so long as the sun rotates the earth in the same fashion it has done for billions of years. That is much better than the depletable resources of coal and gas, which also emit dangerous gasses that are theorized to heat up the earth and expedite global warming.

Although, harnessing the sun’s power to light the world sounds more fanciful and simple than the true process. If it wasn’t, humans would be using this energy source long before now, right? Here is the breakdown of exactly how solar panels work and the issues that have prevented the solar industry from moving forward at a faster rate:

The Anatomy of the Solar Panel

When the photons of the sun reach these positively and negatively charged layers of silicon an electron is produced. This electron is then captured by metal panels along the side of the photovoltaic cell, which transfers the energy to wires. From there, electricity can flow and be harnessed the same way any other form of electricity is utilized.

How is Electricity Generated From Solar Panels 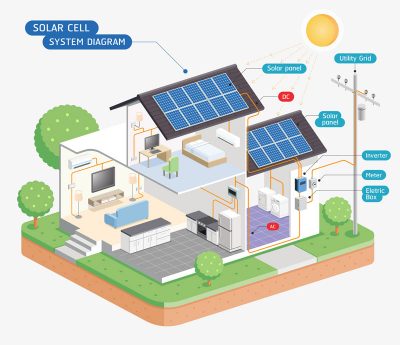 Electricity is generated from solar panels in one direction. This is called Direct Current (DC) which is how a battery works. With DC electric, the current is pulled from the negative electrons, through the object the current is powering, such as a lightbulb or toy and into the positive side. This is a closed circuit.

The issue is that the grid that traditional electric current flows through is Alternating Current (AC). This means that the positive and negative current is constantly pulled back and forth. Plus, the negative and positive states occasionally switch. This makes it possible to simultaneously power many different areas at once. The reason the current electric grid infrastructure is created this way is that it is cheaper.

So, that begs the question: How does DC solar energy enter an AC power grid?

How is Solar Energy Dispersed on a Grid?

Thankfully, the way solar energy, a DC power source is dispersed through an AC power grid is fairly simple if you have the right tools. The tool for this job is a Solar Inverter. The job of the Solar Inverter is to convert DC solar power into AC power so that it can flow properly throughout the grid. Solar Inverters are often referred to as the “brains” or the gateway of the system; because without it, the system would not work. Sure, you would have an extensive amount of power building up and possibly wires to run it somewhere, but almost all American homes, plugs, and appliances are equipped for AC.

Solar panel researchers and enthusiasts are hopeful that inverters will be the gateway to bringing solar energy completely to the mainstream market. There is already a large push, as over 10% of the entire American grid is currently powered by solar and wind energy.

Considering that solar energy only started in the early nineties. It wasn’t until 1993 that Pacific Gas and Electric Company installed the first grid-supported photovoltaic system in Kerman, California. Granted, solar energy was not a new concept but it was the first time solar energy was able to connect to the grid.

Even still, it took nearly two more decades (2008) to make solar panels affordable for the majority of Americans. Therefore, that ten percent and growing is a grand accomplishment for such a powerful initiative, which is still in its infancy.

What Are The Issues Keeping Solar Panels from Becoming Completely Mainstream?

There are always new solutions and improvements being made to solar panels and the Solar Inverters that make their widespread use possible. Yet, there are also problems that continue to arise and complicate the systematic inclusion of solar panels into the mainstream power grid. Here are a few of the most common issues that still need to be solved to help boost solar energy into the mainstream market:

The Variability of Solar Energy:

Even though adaptations continue to be introduced, which make it better, there is still a major variability issue when it comes to mainstreaming solar panels. Basically, the intensity of the sun is not the same worldwide. The National Renewable Energy Laboratory explains that the sun provides nearly twice as much energy to the Mojave Desert as it does to the Pacific Northwest.

Plus, no matter where you are in the world, eventually, there will be darkness. At night, there is no sun, thus, there is no solar energy. That wouldn’t be such a problem but it is compounded by the fact that nighttime is when most people use their energy. After all, they are home, watching television, on their computers, powering their devices, and turning on the lights. Solar energy is at its weakest state at the time of the day when it is needed the most.

Between shorter days and parts of the world where it stays nighttime for days, there are a lot of issues with ensuring that power can be maintained for all areas, no matter what during those times.

First, there is the obvious hiccup of the current grid infrastructure throughout the United States being based in AC power, when solar panels give out DC power. However, for the most part, that is being taken care of with the use of Solar Inverters.

Unfortunately, the second problem is much trickier, as the current grid infrastructure hasn’t been able to figure out how to fix the problem completely with the current mainstream system. Energy cannot be stored when it comes to a grid. Energy can charge a battery of sorts, which will power something else at a later time but as far as the grid infrastructure goes, the energy that is produced is what is produced. If there isn’t enough, there is a power outage. If there is too much, the extra energy goes to waste.

So, when this issue is combined with the volatility of solar energy, this becomes a real problem. After all, even if the day is predictable with twelve hours of the night and twelve hours of daylight, it isn’t possible to guarantee how much energy is going to be produced every day.

In summation, solar panels are a genius, efficient, and exciting power source, which is growing. The intricacies of how solar panels work are fascinating and the ingenuity it takes to make current solar panels work with the grid is impressive. Ultimately, even though there are a few issues that are still plaguing the advancement of solar panels, it is important to focus on how far the industry has come in such a short time. Given a few more years, it is likely that solar power will have found its true place in the world of innovative power supply technology.